Tapas capital of the world

We are now in Basque Country - some might say only just, but I'm sure that's not the way the inhabitants of Spain's most fashionable watering hole feel about their beautiful city. San Sebastian is just over the border from France, pretty close to that other magnet for the trendy wealthy, Biarritz. Basque is spoken all over this part of the north coast, into France as well, and there is a fierce pride in the evident differences in culture, cuisine and even the landscape. It was astonishing to take the West to East trail through the Pyrenees, and see the terrain change from hour to hour. 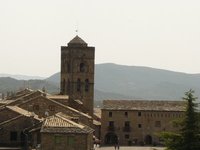 From the high reaches of the picturesque ski town of Benasque we reached the colourful and lively Aragonese town of Jaca, which was in the throes of one of its many August Fiestas, with costumed brass bands from many countries playing all round the streets. The following day we found ourselves climbing again and in a quiet mountain pasture we saw a calf being born, the sound of its mother's gently swinging bell accompanying its wild attempts to stand on brand new gangly legs. 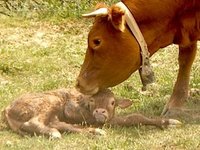 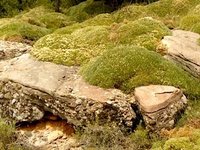 The stumpy gorse of the high Pyrenees was in cream and yellow flower, a deceptive cushion of soft and inviting moss, but not for sitting on. From here we barrelled down through the golden haze of Navarra's rolling wheat plains, dust and heat literally floating in the dry air. 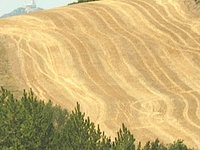 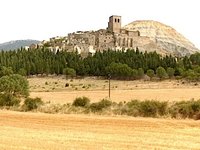 Then, northbound for the coast and San Sebastian, where we are treating ourselves to a plush hotel on the beach promenade, and sampling the most spectacular tapas I have ever encountered in Spain. The choice is mind-boggling, but I am learning at last that eyes are bigger than stomachs, and take only one 'pinxo' at a time. 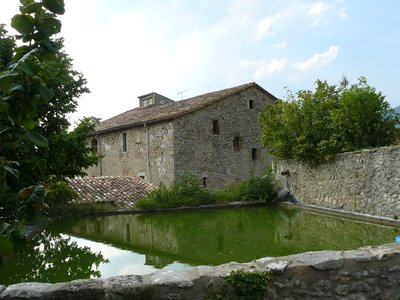 Camillo is a 50-something wiry Dutch hippie who runs this 600 acre hostel on an old olive farm in Granollers de Rocacorba, 1 hour west of Girona. It is vast, almost as big as the very wide and vast Girona cathedral which I strolled through yesterday; a beautiful, listed, 3-story, stone building with a vista of unending forest and overlooked itself by dramatic rocky escarpments. 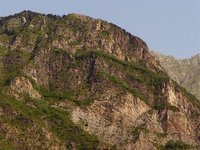 A huge fig tree greets you at the entrance, as well as an Eco-shop. Camillo also runs the largest distribution company in Spain for ecological products. Thus, we knew that everything we ate or drank was pesticide free and most likely vegetarian. And so it proved. Dinner was brown rice with delicious home-grown vegetables and leaves, washed down with an excellent red from the nearby Rioja region. This kind of food never fails to make me feel good, and inevitably prompts inward resolutions to eat like this every day.
We´re staying in this paradise in the Pyrenean foothills for another night, 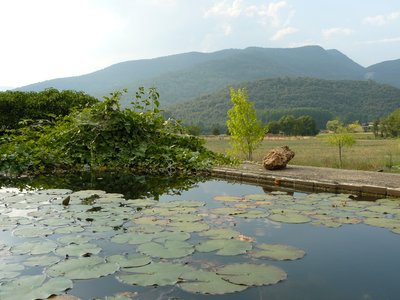 then driving westwards to higher mountainscapes, hoping to be in San Sebastian by Friday. Although as I floated in the green stone pool up by the vegetable terraces late yesterday afternoon, the silence broken only by the buzzing of dragon flies and the rise and fall of the cicadas' sonic cycle, gazing up at the hazy blue sky and the surrounding high forests, I wondered why we had plans to leave. Then I remembered that one of the reasons we´re here in Spain (and there are many reasons, all good) is for me to practice my spoken Spanish. Por que en Septiembre, yo voy a Ecuador, y aqui, tengo que hablar Espanol todos los dias! 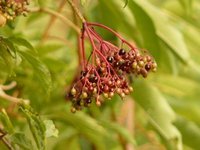 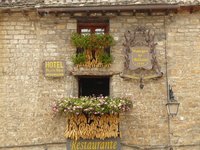 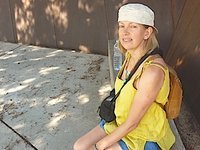