The active volcano, Tungurahua, rears majestically above the mountains surrounding the Andean Spa town of Baños. In 1999, the entire area was evacuated, as a major eruption was forecast. For a while, Baños was a ghost town, but during 2000 volcanic activity decreased slowly and steadily, and the inhabitants and visitors began to filter back in.
Because of its location, Tungurahua is usually shrouded in dense cloud and invisible to the many tourists who come hoping for a glimpse of its smoking rim.

As our bus struggled along the steep mountain road, another bend brought a collective gasp from the passengers on the right. Tungurahua appeared in perfect clarity, the only clouds present the hot ash smoke belching from her active cavity, or caldera. This spectacular sight is such a rarity that even the locals on board were pointing and exclaiming excitedly. The bus trundled on and Tungurahua disappeared from view in the vertiginous landscape.

The volcano is not visible from the town itself. A small, bustling resort, Baños is in a valley already at an altitude of c.1,500m. It is surrounded by mountains, with Tungurahua rising behind these to over 5,000m.

The following day, we hiked up to Run Tun, a mountain village which boasts a 'mirador del vulcan'; a viewpoint for Tungurahua. Although at first the weather looked promising, as time went by the sky darkened, and we were less hopeful of a clear sighting up close. The climb was hard work and of course the signs for the mirador changed constantly (friends reading this will remember a certain evasive town in west waterford when the need to arrive there was fairly pressing). Eventually we stopped to have our picnic and to shelter from the rain, now coming down straight from a heavy sky. We had come out onto a deserted road and there we found a strange little bus shelter. We ate simple and delicious local fruit and cheese - they say hunger is the best sauce. When we had finished, and were debating whether to persevere or turn back, there was the sound of an approaching car. This turned out to be a local taxi, dropping a family home from the market in Baños. He came back and we agreed a price for bringing us up to the mirador, and dropping us back into town. Needless to say, the viewpoint was easily another 2 miles, so it was a happy event for us.

As we walked up the final slope to the top of the mountain, some Ecuadorian tourists were coming down. They were disappointed; they told us there was no view to be had, the vulcan was totally obscured. We couldn't understand why this seemingly gentle hill was such a struggle to climb; it was like wading up through mercury. Our by now friend, the taxi driver, explained it was the altitude that caused this problem. We were probably almost back at Quito altitude at this stage, some 2.500m or so. Eventually we reached the top and found ourselves in a pleasant field, where we were greeted by its owner, who had built a wonderful tree house at the edge of the incredibly steep valley opposite Tungurahua. 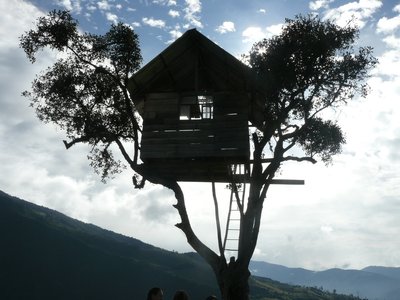 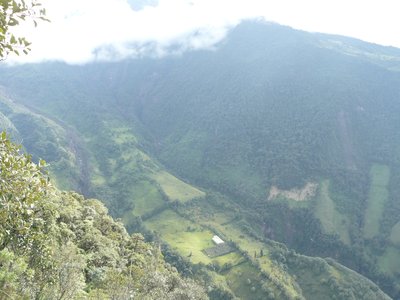 The volcano was not to be seen. Undaunted, we climbed the tree anyway, not that it would afford any better a vista even if there were one - the entire field was ideally located for front row seats at Mama Tungurahua's showing (she is affectionately referred to by this name in Ecuador; Cotopaxi is of course 'hombre' and there is an old legend about the two volcanos). We stood and looked at the valley, at the mountains, and as if by magic, the clouds cleared and this is what we saw.... 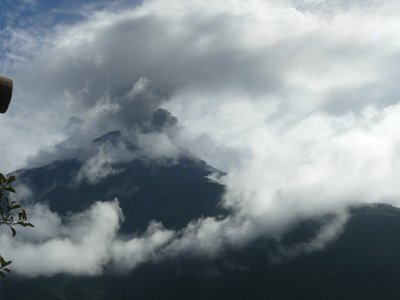 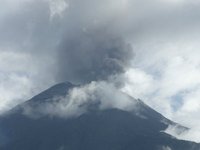 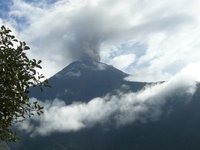 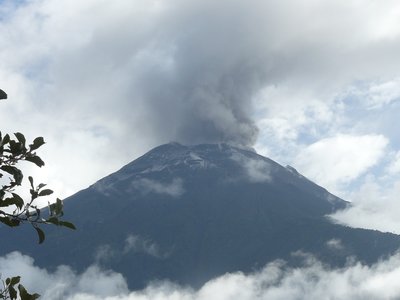 Words cannot describe the feelings of awe and humility inspired by being so close to a live mountain of this stature.
And well-being.. 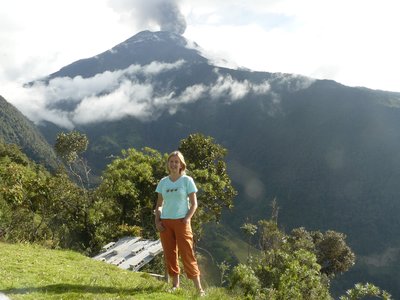 So, I won't try. The pictures will give some idea at least.

We were well-rewarded for such persistance and a long hard climb. That night we soaked in the volcanic mineral baths by the waterfall at the edge of the town, soothing our aching limbs and healing our many insect bites. It was an experience I will long remember, floating in the hot pool, surrounded by Ecuadorian families, socialising and hanging out together, before plunging into the cold pool to close the pores.

The following day we cycled the length of the 'ruta de las cascades'; some 20k or so, and visited the famous 'Pailon del Diablo', a fall of extraordinary power in a channel smoothed out from lava. 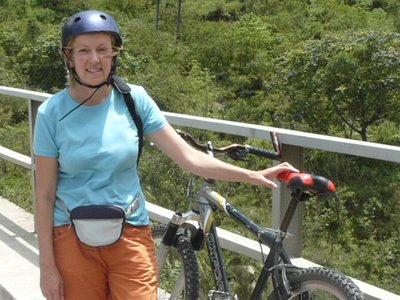 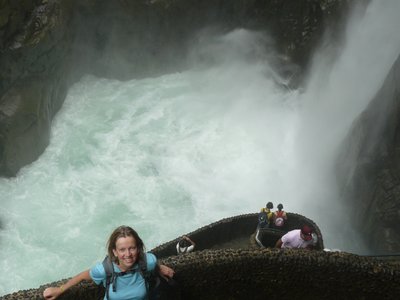 Consider the awe transferred! Amazing, and you're looking great too xoxo

Wow, wow, wow. It is SO beautiful. What an experience you're having. Savour every second. Miss you babe, but keep sending the really interesting blogs and great photos. You're looking so healthy. Love Connie xx

Aha, you're so brave, I think, that close to the volcano! I'm looking forward to such a chance!

helen!!! to repeat the wise words of Connie, "wow, wow, wow, wow wow,!!!" what amazing photo's... such a gorgous place... cherish every moment! and you do look fab! really healthy and happy!

Happy birthday for tomorrow Helen, hope you're having as good a time as it seems from your blog. Mini x