Market Day in the Andes 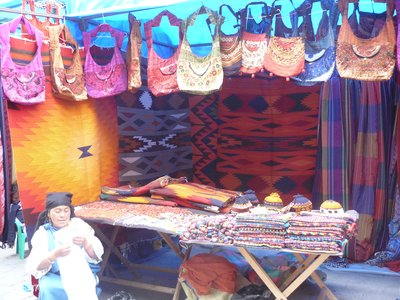 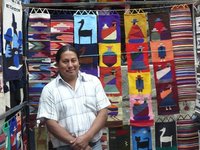 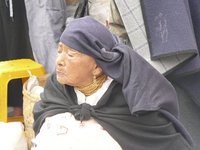 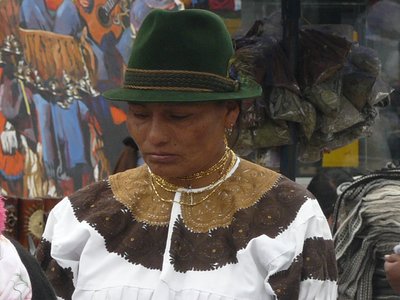 The Andean town of Otavalo is famous for its saturday market, and tourists and locals alike flock to this major attraction every weekend. We took two buses to get there from La Hesperia via Quito, and the journey took five hours in all. Distance means very little in Ecuador - its the road that matters, and the roads in this part of the country are mountainous and quite busy, so progress can be slow, specially if its misty and raining as well.

The market was not a disappointment. We were up and out in the square while the sellers were still constructing their sturdy stalls, and wandering the side streets where the colourful artisan´s market mostly takes place. The animals and livestock market is much earlier, but I wasn´t too keen to see it, being of an oversensitive disposition where animals are concerned. I was afraid I might end up trying to sneak a pig or two and some chickens back to the reserve on the bus with me, so that they would be assured of a tranquil life. 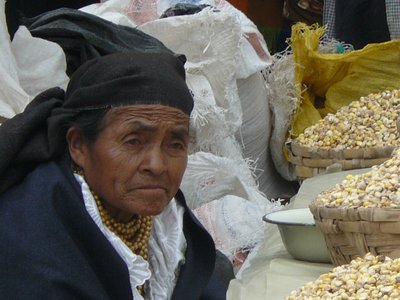 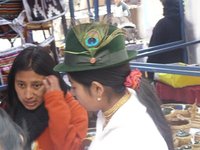 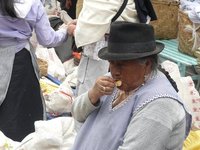 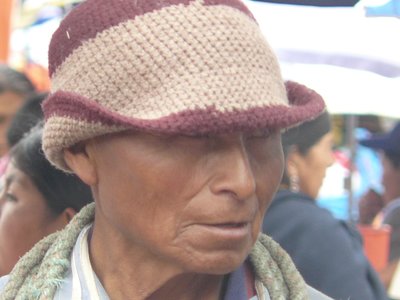 One side of the square was taken up with food stalls, selling anything from fruit to roasted pigs and guinea pigs (an ecuadorian speciality I have yet to try) to maize. Much of the fruit I didn´t recognise, likewise the grains. Corn, or maize, comes in so many guises here, the variety is extraordinary. The lines of baskets, each with different grains and seeds, were a real treat for the eye. The smells of roasting meat, frying maize cakes and cooking rice and potatoes or yukka added an extra olifactory dimension, and it was great to see entire Indian families (the indigenous people as they call themselves) sitting tucking in to freshly cooked local produce. 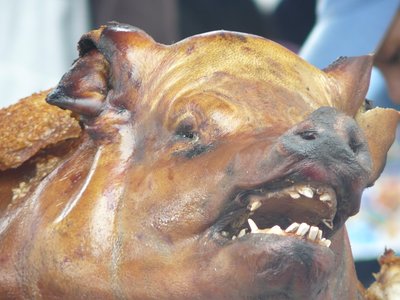 Part of the square was devoted to knitwear: ponchos, sweaters, hats, scarves and blankets, and to woven wall hangings, rugs, hammocks and bags. There were leather goods, ceramics, jewellery made from silver and semi-precious stones, beautiful pieces of crafted Tegua (fruit from a tree, like a nut) and gourds from different semi-tropical trees. Some of the gourds were magnificently inscribed with ´historias´of such topics as ´La matrimonia´or ´Los animales de la selva´or just pictures of musical instruments and people. There was artwork, created from recycled paper with metalwork images of humming birds, condors, sun symbols and other legends of the Quechua or Inca people; there were wooden painted masks galore, some of animals, some of child-frightening monsters; paintings and etchings, charcoals and drawings. You just don´t known where to look. Some sellers are on the aggresive side, coming to meet you if you so much as cast an eye in the direction of their wares, others are gentle, smiling and welcoming. Either way, if it comes to a sale, the price is asked; you reject it immediately, whereupon the vendor asks you to name your price; this too is received with disbelief and a volley of explanations about the complexity and duration of the work that has gone into the piece in question. Eventually, a compromise is reached on both sides, and both parties end the transaction feeling satisfied that it was a fair one. 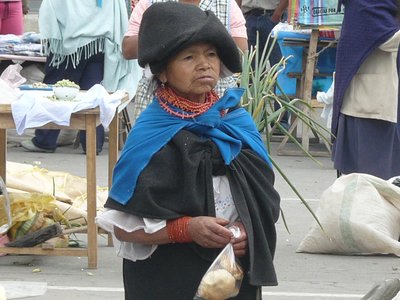 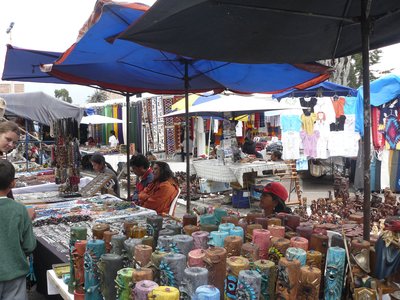 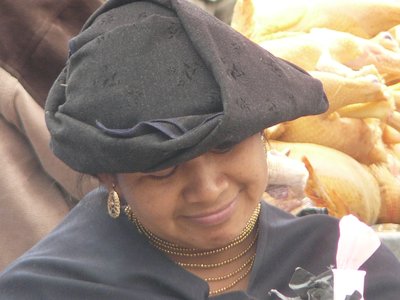 The indiginous people are 'amigable' and interested in where you come from. They speak a clear and articulated spanish, thankfully very different from the smooth tongue-rolling rattle of the natives of Spain I have encountered. So, conversation is easy and simple. I wonder if this is because Spanish is not their first language, as many of the Indian people speak Quechua. At any rate, communication was a pleasure, and many jokes were shared over the course of a very enjoyable day. Worries about non-existant space in my 80 litre backpack will come later...

Meanwhile, back up into the clouds till next weekend. 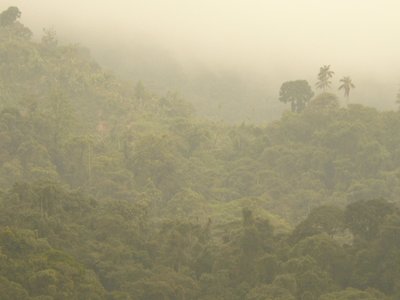 Sounds amazing, just researching for my trip over that way. Got some good ideas from you what to get up to. Great photos aswell, looks beautiful over there. I can't wait

Beautiful ELeniki - I miss the colours in the Andes. Hope you're having a great time.

I'm a new comer here.
I like your pics, I always looking
for the market as in your pic.
Then I can not only see some thing interesting
but also novel! : ) Enjoy your trip!