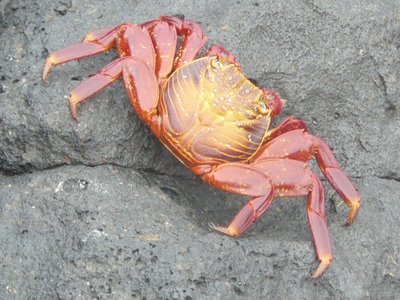 Baltra airport is a small airstrip on the east side of the island of the same name, part of the Galápagos Archipelago which lies some 600 miles off the coast of Ecuador. The flight from Quito took 2 and a half hours, including a stop in Guyaquil, Ecuador's huge industrial coastal city. Our guide, Morris, met us at the airport and we set off by bus and ferry to Puerto Ayora, a small pleasant fishing town with plenty of cafes and shops, which has become Galapagos' 'capital'. 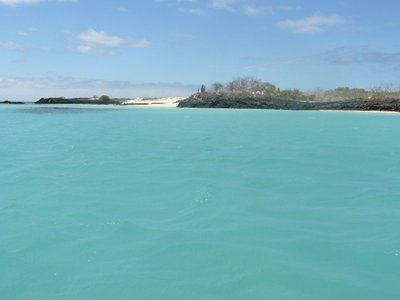 There were six passengers and five crew on the 'compact' catamouran, 'Valkirie'. The cabins were tiny, with most of the space going to the large double beds, which were very comfortable if somewhat claustrophobic. They were set about two feet below the ceiling, which had small peep-windows for star-gazing. This was no luxury cruiser - I had booked an 'activity' tour of the legendary islands so that we could see as much of the renowned bird, fish and mammal life as possible. Since his boyhood bird-watching on various islands off the Irish coast while his older brother was scuba diving, Jan had dreamed of going to the islands made famous by Darwin.

The steep price was in some way justified by what was essentially a private charter with one crew member to each guest, counting our highly qualified naturalist guide. Morris spoke excellent English and was a fund of information on his native islands - their marine and wild life, botanical species and local history. He was also a qualified scuba diver and an agile underwater swimmer, competing with the sealions in their games several metres down. 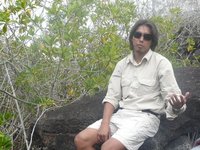 The boat was too cramped to spend much time aboard, so any navigation between islands was done at night, when we were tucked up in our cabins. As some of the distances were considerable, we had one or two protracted and turbulent voyages. I was well-dosed with 'anti-mareo' drugs and was fine as long as I stayed horizontal, but there was an extraordinary incident on the worst night, involving a flying fish. The boat was heaving violently every which way and showers of seawater were washing over our skylights with considerable force when there was a muffled shriek from the next cabin. Katrin, one of the other guests, came lurching through her door, carrying a wet, flapping fish in her towel. It had flown in through their slightly open window during a particularly powerful deluge, landing on the bed. She staggered up on deck and returned it to its element, while the captain and crew stared in disbelief.

On San Cristobel, where there is a Jatun Sacha biological station, we walked to El Junco Lagoon, the only natural source of fresh water on the islands, and watched the wonderfully prehistoric frigate birds, Darwin's finches and mocking birds. We visited La Galapaguera, part of the Galapagos National Park, where we saw a great number of giant tortoises (which is what the name 'galapagos' means). These amazing creatures can live to be 150 years old.

From here we walked to Puerto Chino, a pristine beach where we snorkelled in clear water which was just a bit too cold. The fish life is as varied and abundant as the bird life. Shoals of angel fish, damsel fish and silver sardines flitted past - it was like being on the set of 'Finding Nemo'. I had never seen such spectacular colours close up, although my brother has described the beauty of the underwater world in Mexico, where he and his wife love to scuba dive. The highlight of that day's snorkelling was swimming slowly over a giant stingray which was resting on the sea bed far below us. We kept a respectful distance until it flew away, gracefully flapping its huge wings along the sand.

The next day we went to Kicker Rock in a motor launch. Leon Dormido is an old tuff cone eroded by the deep ocean around it. The dramatic volcanic formation now serves as a nesting site for frigate birds; tropic birds; nezca boobies and the famous blue-footed boobies. 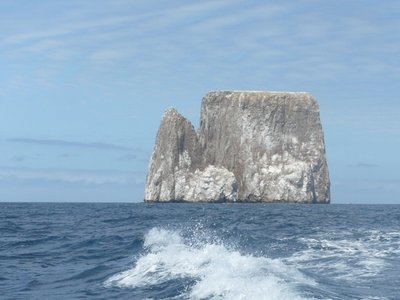 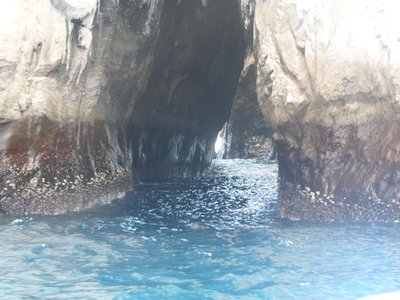 I found it pretty menacing and was not tempted to join the snorkelling group in 200 metres of heavy swell around the sheer walls of jagged rock (a near drowning incident on Montauk beach, Long Island, in 1984 being still strangely fresh in my memory). Morris led three of our group through the central arch of the massive sea escarpment. Masks down all the way, they made their way slowly to the other side of the rock where the launch met them. They were apoplectic with excitement, having seen some very big fish, including sharks, a long way down. 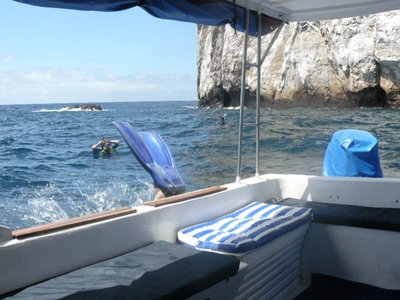 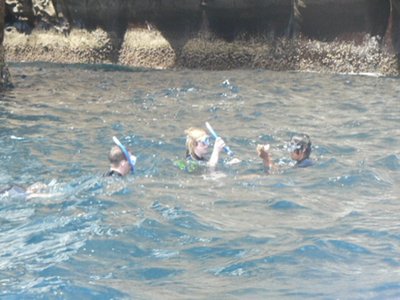 That night, assisted by the engine, we sailed slowly to Floreana, surely the island with the most fascinating history. A German countess and her three lovers, no less, had lived here for a while in the 1930s. The lovers and the countess had all died or disappeared one by one in mysterious circumstances. She was mad as a brush, as can be seen by some rare cine-camera footage we were privileged to see. There was another family living there too - a doctor, his wife and their sickly son, who was also found dead on the beach of this otherwise uninhabited island one day. They lived in 'converted' caves which we visited - a primitive choice of home indeed. The doctor had had all his teeth pulled before coming to Floreana, so that he would not need a dentist where none was to be found. 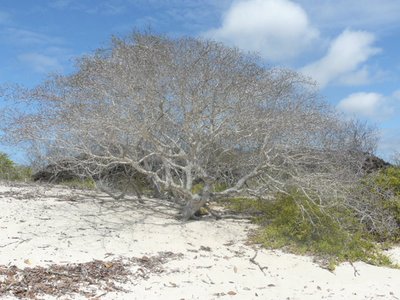 Floreana, like much of the landscape of Galapagos, is dry and barren, its main vegetation the bare, dry season branches of the bleached Palo Santo tree ('holy stick' or 'incense', which is just what it looks like). 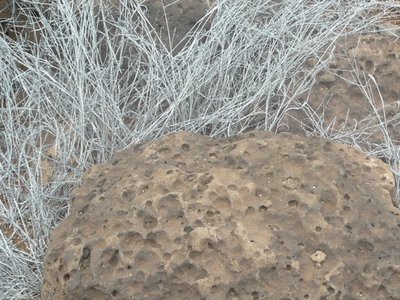 Many pirates and whalers also used Floreana's caves as hiding places. We visited the island's town, which now has a population of almost 100 people, making it the smallest town in the archipalago. 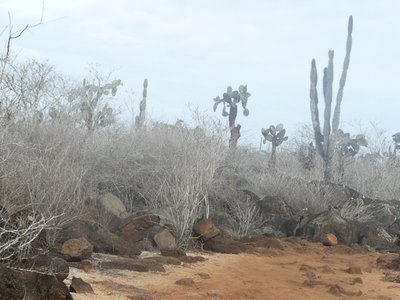 Isabela island is the largest and one of the youngest islands. Some say it is the most beautiful. We took a bus to the interior highlands and rode horses up to the still active Sierra Negra volcano. This volcano last erupted in October 2005. We rode around its vast caldera, or crater - a lava field of huge proportions. I have never been or seen anywhere like this charcoal baked, jagged, lunar landscape, surely the most inhospitable place on earth. You can understand the horrified descriptions of those who landed on these islands - beautiful they are not, but they are fascinating and unique. And even here, in the "ah-ah" lava (so-called because of the cries of pain walking barefoot on it induces), we saw cactus growing from the brittle surface, with lava lizards and mocking birds aplenty. 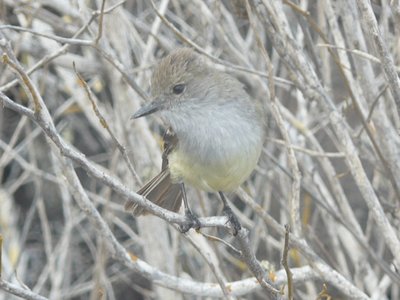 We trekked on a dry lava flow to Vulcan Chico and gazed down at the fumeroles and ashen lavascape, which was turning to violet and pink in the radiating afternoon heat. We rode back in the dust then, arriving sweaty, saddle-sore and covered in lava dust at the bus.

A sunset plunge into the ocean from our boat was heaven.

The next few days included zodiac rides to Tintoreras, a white-tipped shark grotto. These small harmless sharks like to rest in the shallow channels between the lava flows. Walking in this area, we came across whole colonies of baby marine iguanas.

And adults too. There are many different species. 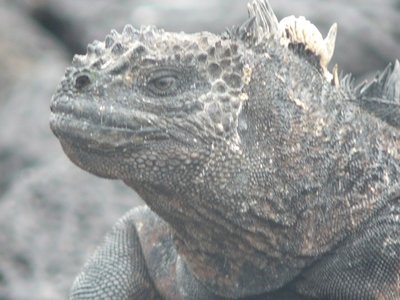 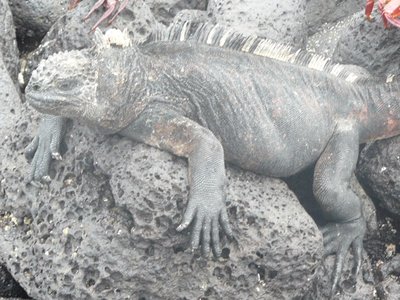 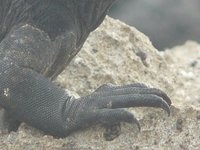 They shake their heads in agitation if you come too close.

Morris explained the bleak story of the 'muro de las lagrimas', the wall of tears, a pointless edifice of sharp lava rocks built by inmates of an old penal colony established on Isabela. The men were forced to labour under conditions of extreme duress.

The atmosphere was heavy with sadness, an indescribably poignant remnant of suffering lingering in the still air. I was sorry I had come.
Jan missed it because he was very ill with salmonella, which we'd all picked up from a barbecue the 'cook' had prepared two nights earlier. We didn't know what was wrong with Jan then, but after a blood test and diagnosis in Peru some days later, a strong course of treatment sorted us out.

Back on we cycled from the top of the island down to sea level, spotting many giant tortoises on the way. No trip to Galapagos would be complete without a visit to the world-famous Charles Darwin Research Centre, where all the strategies to protect and preserve the native and endemic animals are developed. There is a successful giant tortoise breeding programme and of course, the grandfather of them all, Lonesome George, lives there.

Lonesome George is the last of his species sub-group left in the world. The tortoises of each island have different characteristics, developed over centuries to best survive in their particular environment. The shape of the shell is the main pointer to a tortoise's species. Some, for instance, have a higher 'collar' allowing the tortoise's neck to stretch up to tall shrubs. Lonesome George is world famous. He lives under protected conditions but his carers have been unsuccessful in getting him to mate. He is 90 years old.
*Update: since writing this, Lonesome George has of course gone to the great shell in the sky*

It was an eventful week on these extraordinary islands. Apart from our issues with food poisoning, we had an exciting and interesting time, with plenty of excercise and activity. I think I would have to rate the Sierra Negra lava field as my most awesome landscape memory.

And swimming with sealions as my favourite experience. 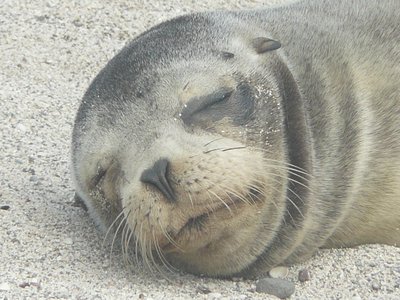 They are wonderful intelligent creatures whose underwater skills are a joy to watch. They are very curious and playful, coming right up face to face with your goggles but shimmying off like lightning just as you think you can touch them with outstretched arms. 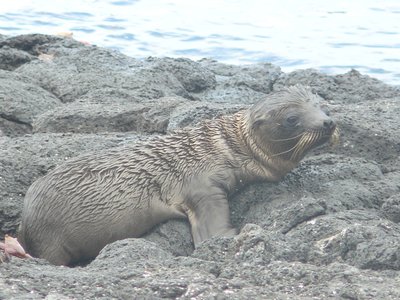 The babies are left in 'nurseries' with a few females while the other mothers go fishing, and the male of the colony patrols the shore. The males can be very aggressive when guarding the nursery, as we discovered.

Galapagos, the enchanted isles, is truly a once-in-a-lifetime destination in that it is very expensive to visit, but also in that, once having been there, it is not likely you will want to return. Why? If you go, you will know why. One thing I was glad to see firsthand was that the much-discussed disruption of the islands' fragile and utterly unique environment, which is home to such an exceptionally tame wildlife population, is being carefully controlled. The only place we felt part of a throng was the Darwin Research centre, where everybody goes. We were, of course, on a tiny boat which stayed off the popular route - some cruise boats accommodate up to 150 passengers. But the islands feel lonely and desolate, which is how it should be. A good reason for only going once. Some people argue that to go to Galapagos is not sustainable tourism, therefore we shouldn't go at all. I see their point. 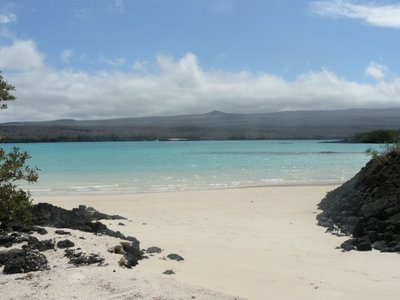